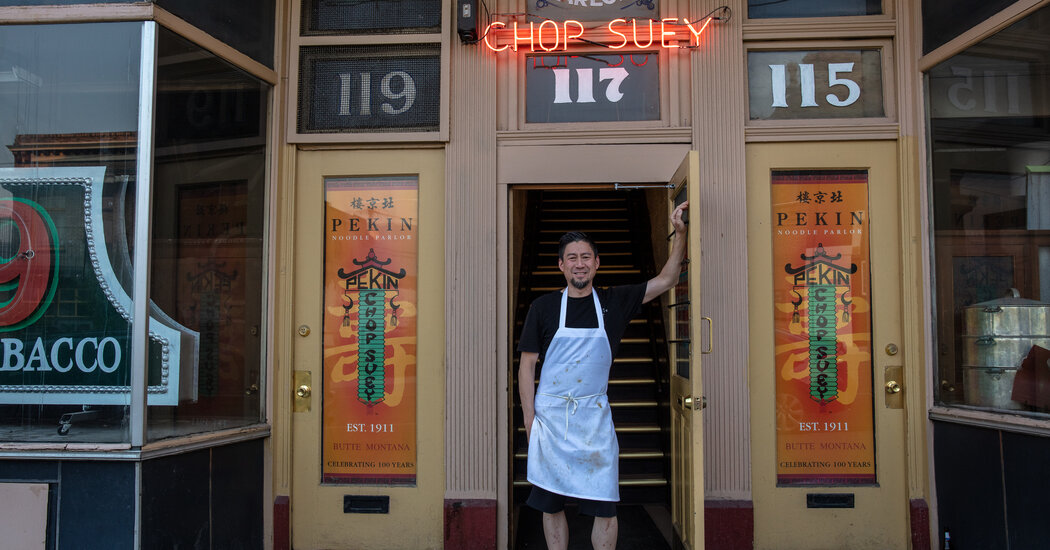 BUTTE, Mont. — Danny Wong had a system for catching thieves.

The longtime owner and face of Pekin Noodle Parlor, the oldest family-owned, continuously operating Chinese restaurant in the United States, ordered servers to lock the front door at the sound of fast footsteps rattling the floorboards. Diners trying to flee the second-story dining room without paying would turn back up the steep stairs in search of another route, only to find Mr. Wong standing there, holding a bayonet and offering a choice: Pay your bill or wash dishes.

The restaurant opened in 1911, and that jail, according to Mr. Tam, was put to frequent use in the 1980s and ’90s, after the economy in this mining town hit bottom, but not so much in recent decades. Mr. Tam had the battered stairs repaired in 2009, when he returned home to help his father and mother, Sharon Tam, run the Pekin, as locals here call it. “It’s one of the few changes we made,” he said.

The impulse to keep the Pekin going, without significantly altering its timeworn character, has resulted in an unusual sort of restaurant: a living artifact of Butte’s history that has now survived two pandemics, but remains tightly knit into the everyday life of this mountain city of 34,000.

The engine of that connection to Butte was Mr. Wong, who purchased the Pekin from his grandfather, Tam Kwong Yee, in the 1950s and ran it until he had a stroke in 2019; he died last November, at 86. (Sharon Tam died in 2014.) His unwavering commitment to hospitality — Mr. Tam said he showed compassion even to those who tried to skip out on their checks — left a deep imprint on a city that isn’t a stranger to hard times.

Max Baucus, a former U.S. senator from Montana and a longtime friend of Mr. Wong’s, said the restaurateur’s influence transcended his role at the Pekin.

“Butte’s not large, and Danny knew everybody,” said Mr. Baucus, who, like many Montana politicians, made regular visits to the Pekin when he came through town. “You walk up the stairs and you knew you were going to have a great time,” he said. “You had to be sure you steadied yourself when you walked back down.”

The Pekin’s importance to this community was evident on July 20, when about 100 people gathered in the alley behind the restaurant to honor Mr. Wong. The memorial, long delayed because of Covid, began with a ceremony renaming the alley Danny Wong Way.

J.P. Gallagher, the chief executive of Butte and Silver Bow County (at right in top photo), said in his dedication that he couldn’t recall the first time he ate at the Pekin. “My dad brought me up here when I was still being carried by my mom,” he said. “But I remember the very first time I stuck my hand into the hot mustard.”

Many of the well-wishers who attended the ceremony and after-party were back at the Pekin when it reopened the following night. A line formed in the hallway for one of the coveted orange-walled booths — a regular occurrence since the restaurant fully resumed indoor dining in June, said Shannon Parr (below), a veteran server. “Ever since Danny’s passing, it’s been crazy busy,” she said.

Mr. Wong was born Ding Kuen Tam in Guangzhou, China, in 1934. He left China after the Japanese invasion, landing briefly in California before settling in Butte. Immigrants from Mr. Wong’s home province, including many of his relatives, were drawn to the city to work on the railroads or in the service businesses that supported the then-thriving mining industry. The Pekin that his grandfather had helped to open was part of a hub of different, loosely connected enterprises, including an herbal medicine store.

Mr. Tam said his father changed his name after a childhood friend told him, “You can’t be Ding Kuen Tam in Butte, Montana.” Wong was the surname of an aunt he lived with after arriving.

In the mid-20th century, Mr. Tam said the Pekin was one of more than a dozen restaurants that served an American variant of Chinese cuisine to local miners. Today’s menu includes dishes that date to the restaurant’s inception, including 16 variations each of chow mein and chop suey. The menu evolved over the years, mixing elements of the Cantonese cooking of Mr. Wong’s childhood and that of his wife’s native Burma (now Myanmar).

Mr. Tam, like his father, fills a number of roles at the restaurant, including chef. He said he learned to cook “through osmosis,” having worked there from a young age. His father rejected his suggestions to replace deli-style poultry used in the chicken chow mein, or the canned mushrooms used in many other dishes. “My dad wanted to show people this isn’t rich people’s food. This is common man’s food,” he said. “This is my father’s regional cuisine.”

Last year, Nelson Lee (below), Mr. Wong’s second cousin, moved from Houston to Butte to help in Pekin’s kitchen, after losing his previous job to a pandemic-related layoff.

Don Michalsky, 73, said he has eaten at the Pekin since he worked as a stock boy at Woolworth’s more than 60 years ago. “Every Friday, I’d get paid, and I’d go to the kitchen and order shrimp fried rice to go,” he said.

Mr. Michalsky’s son, Daniel, 37 (above right), is a bartender at the Pekin, and his grandson, Payton, 12 (below left, in apron), helps out in the kitchen once a week, peeling garlic and drying silverware.

Mr. Michalsky visits the Pekin regularly, often with his wife, Colleen. “For the last 50 years or more, Colleen has ordered the exact same thing, tomato beef chop suey,” he said. “Never orders anything else.”

Evan Barrett, a longtime Montana political operative who has taught Butte history at Montana Technological University, is partial to anything made with the Pekin’s sweet-and-sour sauce (above, covering pork spare ribs). “I used to tell Danny, ‘You need to bottle this stuff,’” he said. “It’s not pink, like it is at other places.”

The building housed several businesses run by Mr. Wong’s relatives, back when the local Anaconda Copper Mining Company was an economic power and as many as 100,000 people lived in Butte. The ground floor and basement spaces have been idle for decades, repurposed for storage; some rooms appear frozen in time. There are still jars of candy on the shelves behind a bar on the first floor (below), left over from a brief experiment to generate revenue during Prohibition. “That lasted maybe half a year,” Mr. Tam said. “No one wanted candy.”

The basement beneath the Pekin is a maze of narrow hallways connecting cluttered rooms that once were illegal gaming parlors, offices and an opium den. Bare light bulbs on the ceiling reveal stacks of old Keno tickets, roulette wheels and slot machines. “It’s a mining town,” he said. “Miners liked to gamble.”

The Pekin is in uptown Butte, at the foot of what is known as the Richest Hill on Earth, for its deposits of copper and other minerals. A local memorial to the 168 miners killed in the 1917 Granite Mountain-Speculator mine fire is adorned with flags from Turkey, Lebanon, Spain and elsewhere, a testament to Butte’s immigrant diversity.

“This was a dynamic city,” Mr. Barrett said. “Uptown Butte was all about the bars and churches, Saturday night and Sunday morning.”

Chinese immigrants were among Butte’s poorest residents, said Mr. Tam, largely because of the Chinese Exclusion Act, which blocked their access to high-paying jobs. His parents had the habit of not throwing things away, he said, because they came from so little.

“This stuff felt like wealth” to them, he said. The Pekin’s bottom floors are just as they were when Mr. Wong died, including his office (above, top).

The store of memorabilia came in handy during the celebration of Mr. Wong’s life. None of Mr. Tam’s four older sisters live in Butte, though all attended the memorial, as did many former Pekin employees. Sue Rawlings, 86 (above left), who moved to Butte from Japan in 1961, was among them.

Mr. Tam said he needed to get past his father’s memorial before he could think seriously about what the future holds for the Pekin. He has considered turning one of the bottom floors into a bar and donating some family possessions to a museum. All he knows for certain is that he will do his best to carry on his family’s legacy.

“We’re going to keep it going as long as we can,” he said.