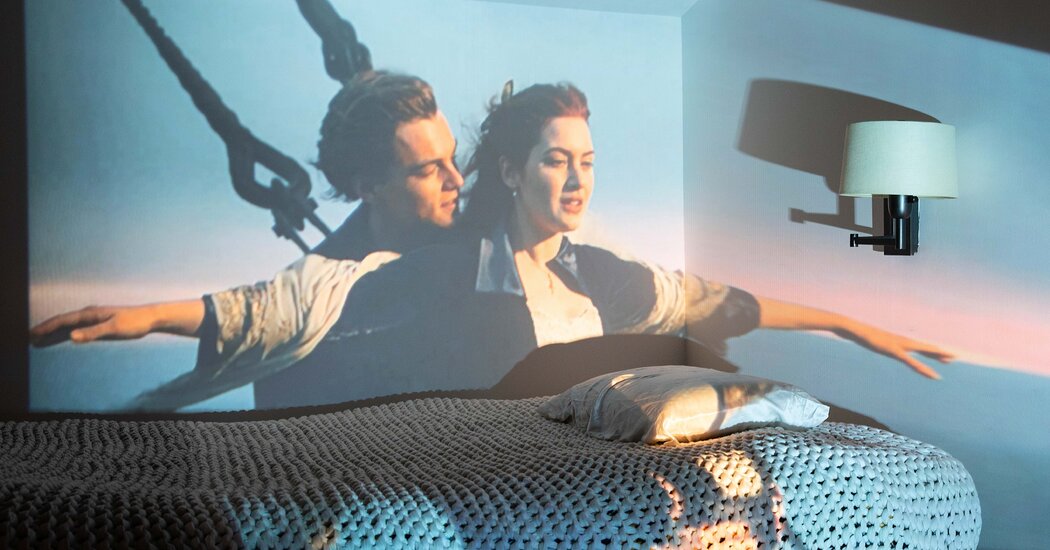 A year ago, I went on a date, and the guy asked me what my favorite movie was. A simple question, but I stammered. His brow furrowed. “Didn’t your profile say that you love movie quotes?”

I didn’t want to reveal the truth — not so soon, at least — so I hid behind the Criterion Collection (“ ‘La Strada,’ ‘Rebecca,’ etc.”). Then a scene flashed in my head — a swell of music, an enormous hat: “You can be blasé about some things, Rose, but not about Titanic!”

A woman’s heart is a deep ocean of secrets; my secret is that I love “Titanic.” This has been true since I was a 10-year-old in a darkened theater, weeping uncontrollably on my mother’s lap. Like the children onscreen waving farewell to the doomed steamer, I marveled at the grandeur of what was passing before my eyes: a sweeping history lesson and a devastating romance between a first-class passenger named Rose (Kate Winslet) and a below-decks dreamboat named Jack (Leonardo DiCaprio). Until then, my cultural diet had consisted of Rodgers and Hammerstein singalongs and the Disney canon. “Titanic” — rapturous, tragic, real — was an awakening. In just over three hours, the film colored all my notions of grown-up life: love, loss, the female struggle, the unbreakable bond of a string quartet.

To my child’s mind, “Titanic” was impossibly vast: It felt as though the movie encompassed the entire mysterious range of human life. It was, unequivocally, the most powerful experience I’d ever had with a work of art — but I was 10. I couldn’t fully understand this feeling of transcendence, so I just kept rewatching. I saw the movie three times when it was released in 1997. The following year, when it came out on VHS — a fat brick of a box set, neatly split into two acts of happy and sad — I routinely popped in the pre-iceberg tape to enjoy with my after-school snack. I began fixating on unlikely features of the film, delighting in its ancillary characters’ banal dialogue: the clueless graybeards (“Freud? Who is he? Is he a passenger?”); the poetry of the bridge (“Take her to sea, Mr. Murdoch. Let’s stretch her legs”); the snobbery of Rose’s mother (“Will the lifeboats be seated according to class? I hope they’re not too crowded”).

As I matured, I stopped my regular viewings, but the movie continued playing in my mind. I was a melancholy indoor girl myself, and Rose perfectly articulated my teenage ennui: “the same narrow people, the same mindless chatter.” Even in the face of more complex ideas and challenges — like the travails of gender politics or problems of class — I found myself leaning on its casual wisdom and glossy sentimentality. The film’s unsubtle gender commentary began to feel revolutionary. (“Of course it’s unfair,” the chilly matriarch says while tightening the strings of her daughter’s corset. “We’re women.”) In the late ’90s, everyone I knew adored “Titanic,” but I felt in my heart that my own love affair with it was something special.

It was, unequivocally, the most powerful experience I’d ever had with a work of art — but I was 10.

Two decades’ worth of late-night jokes and revisionist hot takes, however, have coated my feelings of affection in deep shame. (Just last month, “the iceberg that sank the Titanic” appeared in a bit on “Saturday Night Live,” lamenting, “Why are people still talking about this?”) The older I grew, the more my enduring admiration felt like some sort of clerical error in my development, a box I had accidentally checked on my application to adulthood. I told myself it was just a guilty pleasure. How could it be anything else? Saying “Titanic” is my favorite movie would be like saying my favorite painting is the “Mona Lisa”: It suggests a lack of discernment.

But for me, the movie’s broadness is kind of the point. What snarky critics don’t appreciate is that the movie is a meme because it is a masterpiece. The film has become a cultural shorthand, a way of talking about ideas that are bigger than ourselves — mythic themes of hubris, love and tragedy — while also making a joke. (Has any line captured our collective quarantine mood more than that old chestnut, “It’s been 84 years …”?) It also won 11 Oscars.

This past January, I decided, for the first time in a decade, to watch the movie from start to finish. When I was young — in my Tape 1 years — I was dazzled by the film’s spectacle. And yes, watching again, I fell for it in all the old ways: Jack’s good looks, Rose’s Edwardian walking suit, the allure of a real party. But as the camera panned over the sleeping elderly Rose, I broke into sobs seeing the pictures of her post-Titanic life — riding horses on the beach, climbing onto a flying machine dressed in Amelia Earheart cosplay, posing in an on-set glamour shot.

After a year of great loss, the pathos of that moment hit me differently. Never mind her heart — her life went on. She survived a disaster and ended up living a life so full that the experience became just a memory. It was the message in a bottle I needed, one of many that “Titanic” has sent my way over the years. I imagine I’ll be receiving these messages forever — even as an old lady, warm in her bed.