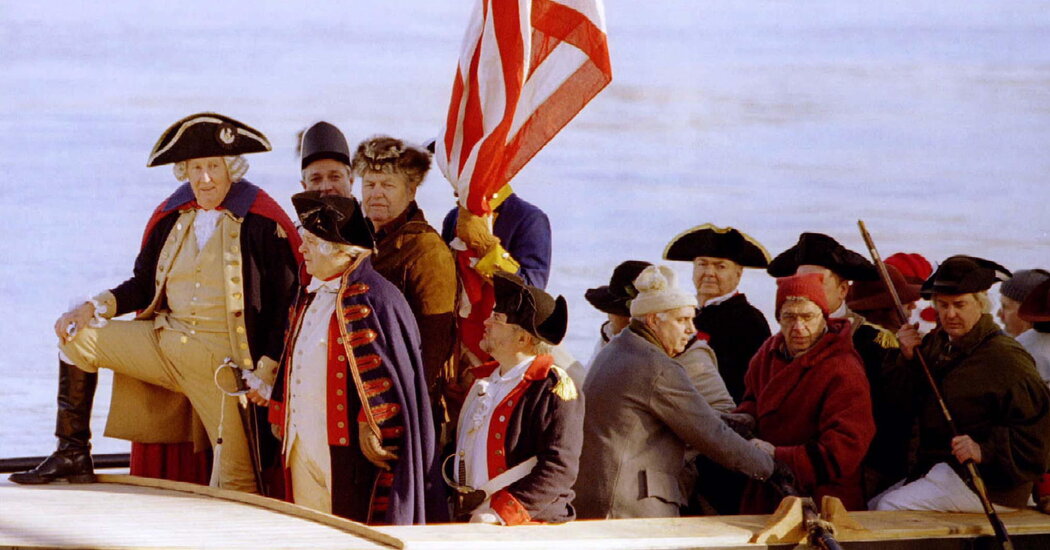 On Jan. 6, rioters entered the U.S. Capitol, some waving 13-starred “1776” flags. Two weeks later, President Trump’s 1776 Commission issued its report calling for “patriotic education,” which painted progressives as enemies of the timeless values of the founding.

And in recent months, “1776” has been a rallying cry for conservative activists taking the fight against critical race theory to local school boards across the country, further turning an emblem of national identity into a culture-war battering ram.

These efforts have drawn condemnation from many of the nation’s historians, who see them as attempts to suppress honest discussion of the past, and play down the role race and slavery have played in shaping the nation from the beginning. But as planning for America’s 250th birthday in 2026 gets underway, some historians are also asking if the story they tell of the founding has gotten too dark.

For scholars, the rosy tale of a purely heroic unleashing of freedom may be long gone. But does America still need a version of its origin story it can love?

The story historians tell about the American Revolution has changed enormously since the Bicentennial. Uplifting biographies of the founding fathers may still rule the best-seller list (and Broadway). But these days, scholars depict the Revolution less as a glorious liberty struggle than as a hyper-violent civil war that divided virtually every segment of colonial society against itself, and left many African Americans and Native Americans worse off, and less free.

Today’s historians aren’t in the business of writing neat origin stories — complexity, context and contingency are their watchwords. But in civic life, where we stake our beginnings matters.

“Every nation has to have a story,” said Annette Gordon-Reed, a historian at Harvard whose new book “On Juneteenth” parses the elisions and simplifications at the heart of various origin narratives.

“We’re arguing now about the content of that story, and finding the balance,” she said. “If you think the United States was a good idea, you don’t want people to think the whole effort was for nothing, or was meaningless or malign.”

In a recent essay about teaching the American Revolution, Jane Kamensky, a professor of history at Harvard, argued that historians need to do more to shore up “our fragile democracy.” The “latest, best scholarship,” she writes, “is brave and fresh and true, all of which is necessary. But it is not, in the end, sufficient.”

And it’s a problem that Kamensky — the lead historian for Educating for American Democracy, a new cross-ideological civics education initiative launched last spring — believes has only grown more urgent.

“We as a profession are very invested in originality, which means toppling,” she said. “I think originality also means discovery and building. We ignore history’s responsibility to help plot a way forward at our peril.”

Americans have been fighting over the history — and mythology — of the Revolution from almost the moment it ended. “There’s no one memory of the Revolution,” said Michael Hattem, the author of “Past and Prologue: Politics and Memory in the American Revolution.” “And the way we remember it has always been shaped by contemporary circumstances.”

As its public mythology evolved, various groups laid claim to its memory and symbols, as a way of defining the nation and anchoring themselves to citizenship. It was Black abolitionists of the 1840s who first promoted the story of Crispus Attucks, the mixed-race Black and Native American sailor said to be the first to die for the Revolution in the Boston Massacre.

For Irish immigrants in post-Civil War New England, claiming spiritual descent from the Revolution became a way of claiming Americanness, while white Yankees sought to preserve the spirit of 1776 as their inheritance through blood.

Those fractures, and fears of “losing” the true Revolution, have carried forward. Today, the Bicentennial of 1976 may be remembered mostly for its explosion of commercialism and “Buy-cetennial” kitsch, as well as celebratory spectacles like a re-enactment of the signing of the Declaration of Independence that drew a reported million people to Philadelphia.

But it came at a moment of extraordinary national division, in the wake of Watergate and the withdrawal from Vietnam. After surviving “some of the bitterest times in our history,” the official commission’s final report declared, “we cried out for something to draw us together again.”

Some saw the task differently. The Afro-American Bicentennial Corporation, a private nonprofit group, worked to designate new Black history landmarks, and organized events like a dramatic reading by James Earl Jones of Frederick Douglass’s “What to the Slave is the Fourth of July?”

And the People’s Bicentennial Commission, a left-wing group founded by the activist Jeremy Rifkin, aimed to recover what it saw as the true, radical spirit of the founding that had been swept aside by big business. At one protest, they burned President Gerald Ford in effigy. At another, Ronald McDonald was hanged from an ersatz liberty tree.

The group drew alarm in Washington. In a May 1976 report titled “The Attempt to Steal the Bicentennial,” a congressional subcommittee denounced it as a front for “organizations of the revolutionary left which seek to pervert the legitimate meaning of the American Revolution.”

Beyond the Founding Fathers

The Bicentennial also kicked off a boom in scholarship on the Revolution, which sometimes spawned bitter disputes between historians focused on recovering the experiences of marginalized people and those taking a more celebratory, elites-centric view.

Within the historical profession, at least, those pitched battles have cooled. If there’s a keystone text of the current scholarship, it’s Alan Taylor’s “American Revolutions: A Continental History, 1750-1804,” a kaleidoscopic synthesis published in 2016. Taylor, a two-time Pulitzer Prize-winner, takes in actors and events far beyond the 13 colonies and the founding fathers, casting a cool, antiheroic eye on the Revolution’s costs for many.

Today, inclusion — geographic, demographic — is also a core theme for those organizing the 2026 commemoration, from the official U.S. Semiquincentennial Commission on down.

“Even places distant from where the Revolution was being fought still had a profound influence on the country as we know it today,” Kevin Gover, the Smithsonian’s under secretary for museums and culture, said.

Gover, a former director of the Museum of the American Indian, said he expected some partisans “would play football” with 1776, but the Smithsonian’s goal was to “treat it with respect.”

“For us, treating it with respect means telling the truth, as well as we can, and really encouraging people to embrace the complexity,” he said.

That may be a tall order in 2021, amid the continuing furor ignited by the 1619 Project, an initiative by The New York Times Magazine that explores the history and continuing legacy of slavery, positing the arrival of the first enslaved Africans in Virginia that year as the nation’s “very origin.” It has sparked intense scholarly and partisan debate, along with celebratory countercampaigns focused on 1620, 1776, and (in Texas) 1836.

Philip Mead, the chief historian of the Museum of the American Revolution, which opened in Philadelphia in 2017, said he hoped the 250th anniversary would help move past the perception of American history as either hagiographic or iconoclastic.

“We need to try to handle it warts and all,’’ he said, “and to make the conversation more overtly a conversation, rather than an adversarial debate.”

The museum doesn’t stint on the underside of the Revolution. One exhibit explores how, for African Americans, thousands of whom fled to British lines, “sometimes freedom wore a red coat.” Another explores the predicament of Native Americans, whose nations forged whatever alliances might best preserve their sovereignty.

“It’s important to acknowledge not just the disappointments of the Revolution, but the really dark outcomes,” Mead said.

What we need from 1776, he said, isn’t an origin story, but a transformation story. “We learn who we are by understanding how we have changed,” he said. “And the Revolution was a huge inflection point in that change.”

The museum’s Semiquincentennial exhibit will focus on the legacy of the Declaration of Independence. It’s a document whose interpretation lies at the heart of today’s hyper-polarized history wars.

Should it be celebrated as a transcendent statement of freedom and equality embraced by Frederick Douglass, Abraham Lincoln, Susan B. Anthony, and the Rev. Dr. Martin Luther King Jr.? Or was it just a philosophical fig leaf hung over a grubby war to defend white liberty grounded in slavery and Native dispossession (and equally useful as a model for South Carolina’s declaration of secession in 1860)?

How you see things depends in part on where you stand. In 2017, when Kamensky started teaching a new class on the Revolution steeped in the best new scholarship, the ethos was “skeptical detachment from the founding mythology.”

She was taken aback when one student, a third-generation Minuteman re-enactor, later told her he had hung up his tricorn and musket. “It’s all garbage and lies,” he told her (putting it more strongly). “Who could be proud of that?”

Kamensky revised her course. Next time, the session on the Declaration’s promise and limits ended with the group reading it together out loud.

“Everyone was in tears,” she said. “But I would not pretend to say they were the same tears for everybody.”

A Democracy … If We Can Keep It?

Even some scholars whose work has most powerfully chipped away at the Whiggish view of the Revolution as unleashing a steady march to universal liberty and equality say they are uneasy at what they see as its hijacking by anti-democratic extremists.

Taylor ’s “American Revolutions” may be short on uplift or admiring odes to the wisdom of George Washington or Thomas Jefferson. But in his class lectures at the University of Virginia, he said, he always tries to connect back to the founders’ understanding of the republic as a living organism which, if not constantly defended by engaged citizens, will “dissolve.”

Robert Parkinson, an associate professor at Binghamton University in New York, is the author of “Thirteen Clocks,” a recent study of how patriot leaders exploited fears of rebellious slaves and “merciless Indian savages” (as the Declaration puts it) to rally colonists to the cause.

“1776 really gets a pass,” Parkinson said. “Race was at the center of how the founding actually happened.”

Still, at the first meeting of his American Revolution class after the 2016 election, Parkinson found himself pivoting to talk about Enlightenment values, and the fragility of democracy. “It was way more patriotic than I usually go,” he said.

It was also, he said, in line with where Americans found themselves in 1776, when — as now — the situation was constantly changing, the stakes were high, the future uncertain.

“Returning to that kind of freshness is another way of talking about the founding,” Parkinson said. “It’s a different kind of usable past.”