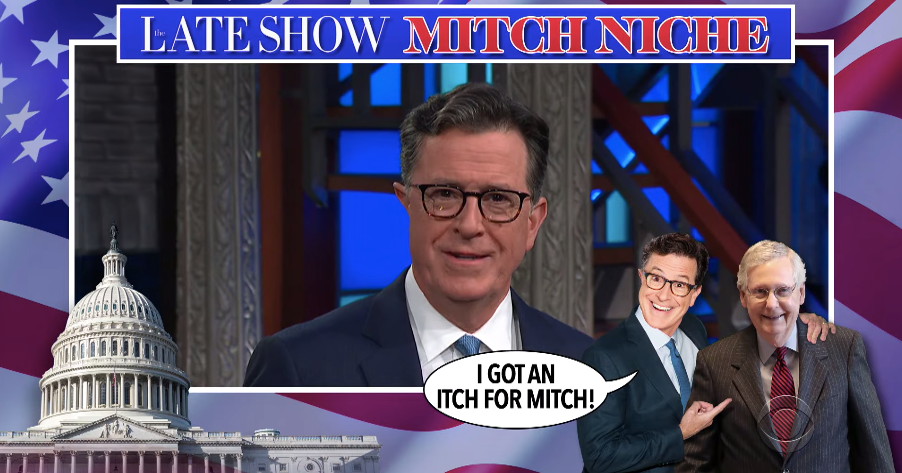 “The rising cases are being fueled by vaccine hesitancy, which itself is being fueled by a dangerous pathogen scientists are calling the Republican Party.” — STEPHEN COLBERT

Representative Steve Scalise, Republican of Louisiana, also encouraged skeptics to get the shots after receiving his first dose this week, saying, “I’ve been vaccinated, many of my colleagues have been vaccinated, and the vaccine is safe, effective, and it’s widely available.”

“Yeah, Steve, we know. We all got it months ago.” — STEPHEN COLBERT

“Steve Scalise is like the guy who just now found out about ‘Bridgerton’: [imitating Scalise] ‘You guys, it’s like Jane Austen, but with high, tight man butt. That Shonda Rimes has got a real future.’” — STEPHEN COLBERT

“But Scalise seems to want it both ways, because he then criticized public health outreach, saying, ‘You’re seeing some people try to bully people into doing things instead of just encouraging them.’ OK, that’s a good point. Invite people in, entice them, don’t call them out. So tonight, we at ‘The Late Show’ have updated our prize for any unvaccinated Americans who go get the shot. You will now win a lifetime supply of ‘life’ and ‘time.’” — STEPHEN COLBERT

“Inoculations have slowed dramatically, and less than half of the total U.S. population is fully vaccinated. So if you think of it like a pie, about half of the pie would be vaccinated while the other half wouldn’t be able to taste the pie because they have Covid.” — STEPHEN COLBERT

“Hey, I want to say congrats to the Milwaukee Bucks for winning their first N.B.A. championship in 50 years. Fifty years. That’s right, they beat the Phoenix Suns, 105-98. But of course, Arizona has demanded a recount.” — JIMMY FALLON

“The game was such a disaster for the Suns, Chris Paul had to file a claim with State Farm to cover his losses.” — ANTHONY ANDERSON, guest host of “Jimmy Kimmel Live,” referring to the Suns point guard

“The finals’ M.V.P. was Giannis Antetokounmpo, who’s from Greece. Yep, a Greek N.B.A. superstar. He could be the first person to star in ‘Space Jam’ and ‘Mamma Mia.’” — JIMMY FALLON

Anthony Anderson, the guest host of “Jimmy Kimmel Live,” sent cameras to Hollywood Boulevard to find someone who could spell “Giannis Antetokounmpo.”

What We’re Excited About on Thursday Night

Hannah Einbinder, star of the HBO Max series “Hacks,” will sit down with Stephen Colbert on Thursday’s “Late Show.”

Also, Check This Out