How the , RWAs, citizens are together reining in the spread of contagion in micro-containment zones across

The Bruhat Bengaluru Mahanagara Palike’s efforts towards reining in the spread of covid-19 are working wonders in a relatively short span of time — thanks to residents and RWAs working in coordination with the BBMP.

From a recent spike of over 170 micro-containment zones in Bengaluru, the number dropped to 131 within a week.

The civic body changed the rules for micro-containment zones and brought down the number of cases in a zone from five to three. The new tweaked rule seems to be immensely helpful in preventing the spread of covid-19.

Last week, the number of micro-containment zones shot up to 172 in 80 apartments. The number has now come down to 131 zones in 50-odd apartments.

BBMP special commissioner for Health and IT D told BM that the civic body did not have to force declare micro-containment zones or seek the help of marshals to implement the new rules of containment. According to Randeep, residents and RWAs are cooperating well with the authorities. “Compared to previous weeks and months, now, people have accepted the reality. They do not have the stigma regarding a containment zone as before. Residents and RWAs worked hand in hand with the BBMP making it a success.

People in containment zones have been cooperating well and are in regular contact with the BBMP updating their health status while following all the regulations. The apartments and RWAs are doing a great job with regular checkups on people entering the building, checking RT-PCR reports of those who have travelled and picking up deliveries at the entrance instead of the doorstep,” he said.

Randeep added that the epidemiologists working with the BBMP have been tracing the source of covid-19 cases and are immediately sealing the flats in question along with adjacent floors.

“Certain flats had to be sealed. As far as the elderly were concerned, we requested to keep them out, which was agreed upon. The more disciplined apartments were turned into de-containment zones sooner which made people follow rules and regulations in a much stricter fashion,” Randeep explained. 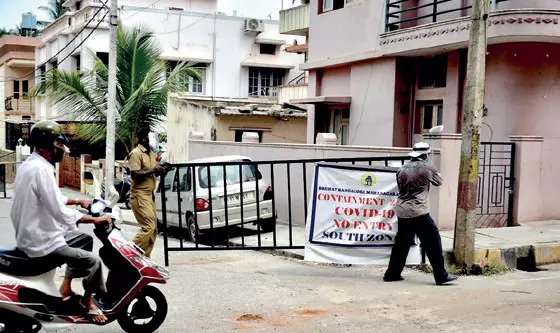 A senior health officer said micro-containment has helped in identifying and tracing the contacts faster: “Earlier, it was difficult to get people to talk about the source of covid-19 spread, and trace primary and secondary contacts. Now, with the BBMP assuring them complete assistance, people are honest about recent whereabouts and gatherings. They are sharing their contacts as well which helps us in tracing and testing further. In many cases, while testing in the neighbouring houses/flats of containment zones, we stumble upon a case or two and immediately control the spread by isolating the individuals concerned, which has indeed helped a lot.”

The health officer added that temples and gatherings for festivals play a major role in the spread of covid-19.

As the cases were going up, in view of festivals, Bengaluru Urban Deputy Commissioner decided to ban public entry to the temples on weekends and holidays to contain the spread of covid-19 till September 7.

“A lot of people who tested positive had attended functions and funerals. We were able to restrict people going to temples and devotees standing in lines next to each other spreading the infection during and weekends which helped in the number of cases coming down,” the health officer said.

However, with the festival season kicking off, authorities have cautioned the public to continue maintaining covid appropriate behaviour.

Doctors and authorities warn we are still in the middle of the pandemic. They say citizens must follow safety precautions during festivities and consult a doctor even if there are mild symptoms for early detection and treatment.