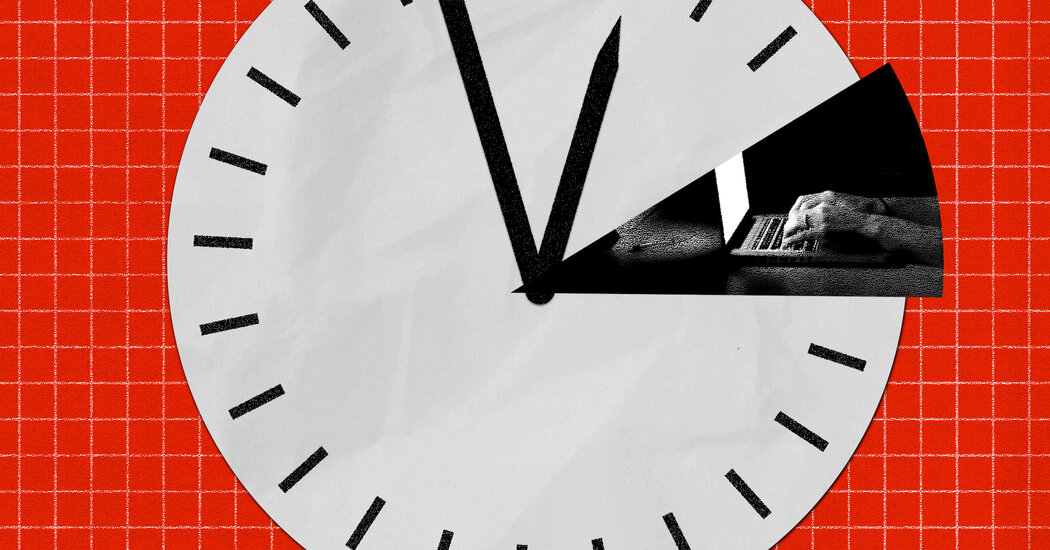 With more than half of American adults fully vaccinated against Covid, employers and employees alike have turned their eyes back to the office. They’re locked in a conflict over when they’ll return and, when they do, what the return will look like. But we shouldn’t just be talking about the parameters of how we get work done in a postpandemic world. We should be pushing to do less of it.

In truth, the debate over the return to the office is fraught. Employers are used to being able to dictate when and where employees work, but we have now discovered that a lot of work can be done at odd hours between remote school lessons and from home offices or even the comfort of one’s bed.

So now there’s a tense push and pull over when and how much people should start commuting and how much power over the question employees can exert. Everyone is focused on how we will make work work after such a severe shock to the system for how things used to get done. But the ultimate answer won’t be found in hybrid remote and in-person offices or even in letting employees shift their hours around. The way to make work work is to cut it back.

Nearly everyone went into overdrive when the pandemic hit, and we aren’t showing signs of letting up. By April of 2020, during the first big Covid spike, homebound working Americans were logging three more hours on the job each day. As our commutes disappeared, we poured much of the extra time not into our own lives but into our Zoom meetings and Slack messages. Working on a primary job ate up the most of the saved time (35.3 percent of it to be exact); an additional 8.4 percent went to a second job. The line blurred between work and home, and we let work take over. No wonder a third of Americans now say they’re burned out by working at home.

But as we start to fumble our way back to some sort of normal, it’s not enough for employees to demand that our hours return to what they were. Prepandemic, nearly a third of Americans clocked 45 hours or more every week, with around 8 million putting in 60 or more. While Europeans have decreased their work hours by about 30 percent over the past half century, ours have steadily increased. We have long needed better work-life balance, but despite constantly trying to hack our lives by waking up before dawn or exercising during lunch, that can be achieved only by actually working less.

To Americans, who log 7 to 19 percent more time on the job than our European peers, that may sound heretical. But we should heed the other countries that have come to this realization. This year, the Spanish government announced a pilot program to entice companies to try out a four-day workweek without reducing anyone’s pay. Last month, Japan released economic policy guidelines encouraging employers to do the same. Iceland just published results from an experiment with a four-day week in Reykjavik that ran from 2015 to 2019 and found that productivity didn’t decline and in some cases even improved. The reduced schedule showed “that we are not just machines that just work,” one Icelandic participant said. “We are persons with desires and private lives, families and hobbies.” Employees reported being less burned out and healthier.

Working too long is bad for our health, associated with not just weight gain and more alcohol and tobacco use but also higher rates of injury, illness and death. A study that looked at long work hours across 194 countries found a higher risk of heart disease and stroke, leading to about 745,000 attributable deaths. Long work hours are “the largest of any occupational risk factor calculated to date,” the authors wrote.

There is a class divide in overwork in the United States, however. The demand to spend 60 hours at an office is one that depletes the lives of professional, higher-paid workers. What would appear to be an opposite problem plagues those at the lower end of the wage scale. In 2016, about one-tenth of American workers were working part time but trying to get more hours. Despite current hand-wringing that these workers are refusing to come back to the job, thanks to lucrative unemployment benefits, the problem is typically the opposite: People who work in retail or fast food often struggle to get enough hours to qualify for benefits and pay their bills, just to survive.

They also struggle to cobble them together into a predictable schedule. Sixteen percent of American workers’ schedules fluctuate based on their employers’ needs. The people who suffer from just-in-time scheduling that never quite adds up to a normal 9 to 5 aren’t spending their off hours on leisure. They’re working second and third jobs. They are hovering over an app to find out if they’re going to be called into work and are scrambling to piece child care and transportation together if and when they are. Employers are still usurping their time by forcing them to be available at a moment’s notice.

“The overlap between the overworked executive and the underemployed hourly worker,” said Susan Lambert, a professor of social work at the University of Chicago, is “that they cannot fully engage in their personal or their family life.” Employers steal both overtime hours spent in front of a computer and off hours spent piecing a decent income together.

If everyone worked less, though, it would be easier to spread the work out evenly to more people. If white-collar professionals were no longer expected or required to log 60 hours a week but 30 instead, that would be a whole extra job for someone else. That would allow more people into positions with middle-class incomes, particularly young people looking to put college educations to use. We could even guarantee everyone a floor, a certain number of hours, at the same time that we lower the ceiling. That would push low-wage employers to fully use the people they have and not treat them as interchangeable cogs to be called upon or turned away whenever demand necessitates.

The goal, Dr. Lambert told me, is “one reasonable job per person.” Not “two for one and half for another.”

A reduction in work doesn’t have to mean a reduction in anyone’s living standards. In 1930, in the midst of the Great Depression, John Maynard Keynes predicted that by 2030, we would need to work only 15 hours a week. Technological advances and increasing productivity and prosperity would mean we could have everything we needed by doing less. But while Keynes underestimated the jump in technology and wealth we would experience in the intervening years, instead of working less, we’re working harder than ever.

That doesn’t mean we’re producing more. There’s a point at which we simply cannot squeeze any more useful work out of ourselves, no matter how many more hours we put in. Studies show workers’ output falls sharply after about 48 hours a week, and those who put in more than 55 hours a week perform worse than those who put in a typical 9 to 5. Even during the pandemic, as work hours shot up, output stayed flat, which means productivity actually fell.

None of this is news. Henry Ford famously reduced shifts in his auto plants in 1914 to eight hours a day without cutting workers’ pay and was rewarded with a boom in output. Years later, after mass strikes and mobilization and during the same depression that inspired Keynes, the 40-hour workweek became enshrined in law by the Fair Labor Standards Act. But there’s nothing scientific or preordained about working eight hours a day, five days a week. It’s just the norm we’ve accepted — and increasingly blown right past.

Keynes took the opportunity of a generational economic depression when millions were thrown out of work to look forward and imagine what the future could, and should, look like. Workers used the Depression as an opportunity to force through legislation that levies a penalty on employers that make people work more than 40 hours a week. The pandemic is our chance to do something similar. Employees hold a lot of power over employers scrambling to ramp production back up and negotiate over what the new office normal will look like.

This is an opportunity for us to seek more control over not only where we work but how much we work, too. Americans can’t be content just to gain the right to work 6 to 2 instead of 9 to 5. We have to demand time off that lasts longer than Saturday and Sunday. We have to reclaim our leisure time to spend as we wish.