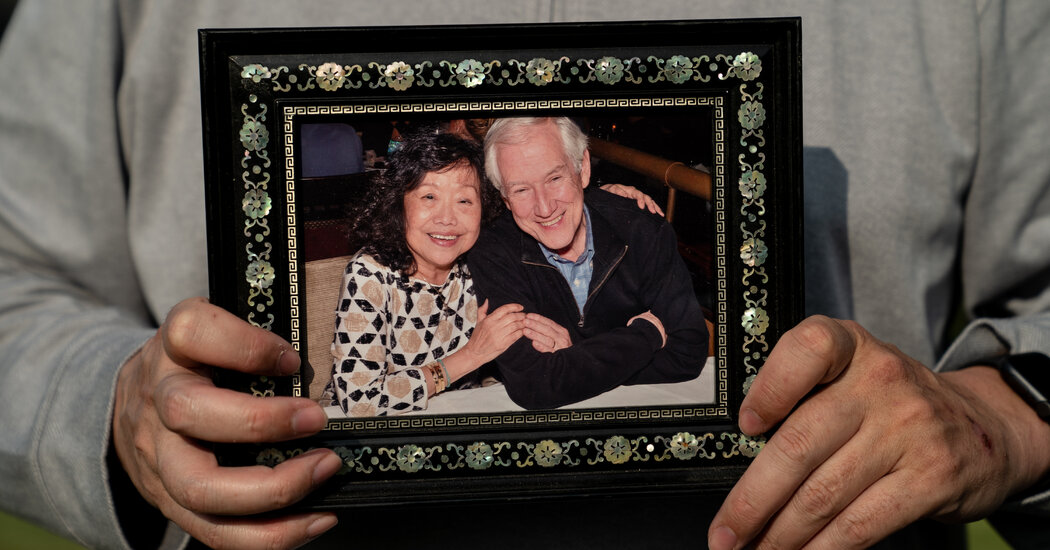 WASHINGTON — After two decades in the military, after earning two master’s degrees and navigating a successful career as a corporate coach, Victor Stemberger seemed ready for a peaceful retirement. But he had a new venture in the works.

Mr. Stemberger, of Virginia, had a $10 million inheritance waiting for him, according to men claiming to be affiliated with the Nigerian Ministry of Finance. Through a dizzying web of more than 160 emails over the course of a year, Mr. Stemberger, then 76, somehow grew convinced.

The final step to collect his millions was a good-will gesture: He needed to embark on a whirlwind tour to several countries, stopping first in São Paulo, Brazil, to pick up a small package of gifts for government officials.

With that parcel tucked away safely in his luggage, Mr. Stemberger got ready to board a flight to Spain, the next leg of his trip.

“Standard protocol for dealing with government officials in this part of the world,” Mr. Stemberger assured his son, Vic, in an email. “No contraband — be sure of that.”

The next day, Vic Stemberger received a text from a Spanish number: “Your father is in prison.”

International criminals have long set their sights on older Americans, deceiving them with promises of money or romance and setting them up to unwittingly carry luggage filled with drugs or other contraband, hoping they will not raise flags in customs.

But Mr. Stemberger’s case shines a discomfiting light on a little-known program run by Immigration and Customs Enforcement known as Operation Cocoon, which is devised to disrupt international drug trafficking rings.

Under the program, ICE officials share information with foreign law enforcement agencies when they learn about potential smuggling. But critics say the program does not do enough to warn unwitting drug mules that they are being duped; instead, U.S. officials in some cases are delivering vulnerable older Americans straight into the hands of investigators in foreign countries, where they can be locked up for years.

“If somebody from the U.S. government showed up at my father’s house and spoke to my dad and said, ‘Hey, look, we have reason to believe you’re being scammed,’ there’s 100 percent no doubt he would have dropped it,” Vic Stemberger said.

His father has been in a Spanish prison since the police arrested him as he got off a plane in Madrid nearly two years ago and found more than five pounds of cocaine sewn into jackets in his luggage, according to court documents.

A Spanish court sentenced him last year to seven and a half years in prison.

Since Operation Cocoon was created in 2013, information shared by ICE has led to more than 400 travelers being stopped by law enforcement at foreign airports, resulting in about 390 drug seizures. More than 180 of those stopped on suspicion of carrying narcotics were American citizens, and 70 percent of those were over age 60.

(Asked if the operation’s name, which is no longer used by ICE, is a reference to the 1985 movie “Cocoon,” about elderly people rejuvenated by aliens, an agency spokeswoman said she had “no background readily available.”)

Vic Stemberger firmly believes his father was tricked; he said cognitive issues from a brain aneurysm 15 years ago made his father vulnerable to the scheme.

The Trump administration informed some members of Congress last year that Mr. Stemberger was most likely arrested after ICE shared information with foreign authorities through Operation Cocoon, according to correspondence reviewed by The New York Times.

The correspondence suggests U.S. authorities became aware of Mr. Stemberger’s plans before he left, something Vic Stemberger believes amounted to a missed opportunity to save his father. John Eisert, the assistant director of investigative programs for Homeland Security Investigations, a branch of ICE, said the agency generally became aware of such plans when it picked up on irregular travel, but declined to comment on Mr. Stemberger’s case.

But he emphasized the difficulty of detecting and warning older Americans that they were being targeted for illegal activity. Even when agents do reach out, the victims occasionally ignore the warning, and officers will at times find out someone has been coerced or fooled only after that person has been arrested, Mr. Eisert said.

“Imagine how many more there really are,” Mr. Eisert said. “And that’s the sad aspect when we speak about elder fraud abuse.”

But, he said, older people are not ICE’s target — if agents become aware they are being lured by criminal groups, and discover evidence they are unwitting, the agents are supposed to find a way to warn them before they step on the plane. ICE officials say they are focused on sharing information with overseas partners to secure the arrests of serious criminals and to build a case against international trafficking organizations, he added.

“If we ever had the information to intercept somebody before traveling overseas, that’s the first priority,” Mr. Eisert said.

Some senators — and family members of older Americans in prison — wonder if the interceptions are coming too late, or at all.

“We are concerned that in an attempt to interdict illicit contraband being moved by unsuspecting senior citizens, Operation Cocoon may have led D.H.S. to provide information about these unwitting Americans to foreign law enforcement partners who then arrested, prosecuted and jailed them abroad,” Virginia’s two Democratic senators, Tim Kaine and Mark Warner, wrote in letters to the Department of Homeland Security last year and again to the Biden administration last month.

Investigators from the Southern District of New York and the Drug and Enforcement Administration, in part hoping to lighten Mr. Stemberger’s sentence, told Spanish authorities in October 2019 that he appeared to have been “pressured, cajoled and subjected to a variety of deceptive and manipulative strategies to induce him to believe that he would receive millions of dollars in inheritance funds.”

“This scheme resulted in Stemberger’s arrest,” the investigators said in the document, which was reviewed by The Times.

This spring, a court in Spain upheld Mr. Stemberger’s sentence, rejecting his lawyer’s argument that cognitive issues from his aneurysm made him easily coerced. The judge was also skeptical that Mr. Stemberger was not aware that the jackets he was carrying contained drugs.

“Just by picking them up, he could perceive something abnormal in the touch of the garments,” Judge Javier Hernández Garcia wrote in the Supreme Court ruling. Mr. Stemberger’s service in both Vietnam and Korea “should have led him to doubt the legality of the products transported,” the judge wrote.

There have been cases where Americans caught up in scams overseas have been released.

J. Bryon Martin, a 77-year-old retired pastor from Maine, spent nearly a year in jail in Spain after authorities found more than three pounds of cocaine hidden in an envelope he picked up in South America. He said a woman he fell in love with online had asked him to pick up the package and bring it to her.

Ms. Collins said she was disappointed the State Department had not done more to secure the release of other seniors like Mr. Stemberger. “That’s one reason we have embassies and consulate services all over the world, to take care of American citizens who are being unjustly treated by the host government, and that certainly seems to have occurred in this case,” she said.”

But often, once someone is arrested on foreign soil, the cases languish.

Just a month after Mr. Stemberger’s arrest, the police found more than two pounds of cocaine in an envelope at the bottom of 82-year-old Primo Hufana’s suitcase in Madrid. The Trump administration also indicated to members of Congress that another American was arrested because of information shared by ICE. Mr. Hufana appears to be that American; his arrest date matches the one specified in the correspondence obtained by The Times.

Mr. Hufana, a Californian, often ranted to his children about business opportunities he found on the internet. His daughter, Veronica, said that years before Mr. Hufana’s arrest, law enforcement officials had warned him that he could be at risk after he sent a large sum of money in a wire transfer.

Even now, when Ms. Hufana calls her father, who is serving a seven-year sentence, he asks her to connect the Spanish court with the bank employees who recruited him, so they can tell authorities his arrest was a mistake.

“They brainwashed my dad,” she said of the scammers.

Mr. Hufana’s lawyer, Matthias E. Wiegner, said Spain had become a hot spot for apprehensions in part because it is a common transit hub.

Mr. Wiegner said narcotics organizations used to recruit young people vacationing in South America but had turned to less obvious targets. “You probably wouldn’t suspect a grandmother or grandfather of carrying 25 kilos of cocaine,” he said. “If you have a 25-year-old European surfer, it might raise a bit more suspicion.”

Ms. Collins, who has served as head of the Senate Special Committee on Aging, acknowledges that the job is tricky.

“ICE has an obligation to try and prevent seniors with cognitive difficulties or who simply have been duped from becoming further victimized by these international criminals, but it’s not always easy for ICE to do so,” Ms. Collins said. “There may be cases where ICE can’t be certain whether the person is an unwitting victim or is involved in a scheme in order to get money.”

Mr. Eisert also emphasized the difficulties facing investigators, who must pick up a pattern of “irregular travel” before they can intervene in an older American’s plans, or family and friends who come forward to report their elders.

In Mr. Stemberger’s case, such a pattern was obvious, his family and lawyers say.

Nine months before Mr. Stemberger was arrested, the scammers had lured him into another trip, which took him to Buenos Aires, then by ferry to Montevideo, Uruguay, and on to Madrid. His family members said they had no idea — Mr. Stemberger told his wife he was heading to Chicago.

For all his globe-trotting, Mr. Stemberger heard from no one in law enforcement, according to his family. “No welfare check. No phone call. No email,” Vic Stemberger said.

In his email exchanges with the scammers, Mr. Stemberger occasionally expressed concern that he was entering a fraudulent agreement, a finding U.S. investigators highlighted to Spanish authorities when arguing that Mr. Stemberger thought he was pursuing a legal business opportunity.

“You are aware of those risks due to the corruption in Africa, so my suspicion should not be a surprise to you,” Mr. Stemberger wrote to the men in June 2018, adding that he wanted to ensure no one he met overseas would demand money from him. “If these kinds of things occur, my time will have been wasted, and there could be other kinds of trouble in store for me.”

One of the men responded: “I don’t understand why you flair up at the slightest error or misjudgment. Nobody is perfect.” He accused Mr. Stemberger of being “full of rage.”

Mr. Stemberger’s wife waits by the telephone most days, unsure of when her husband might be able to use his daily phone call. He is now taking anti-depressants in prison. During one recent conversation, Mr. Stemberger told his son he felt “all alone.”

“No one speaks English or even tries to communicate with me,” he said.

Vic Stemberger said he asked his father to reflect on the ordeal that landed him in prison, potentially for the rest of his life.

“I always look for the downside in a business transaction, and I thought I had made sure that everything was right,” Mr. Stemberger replied. “I guess I was wrong.”