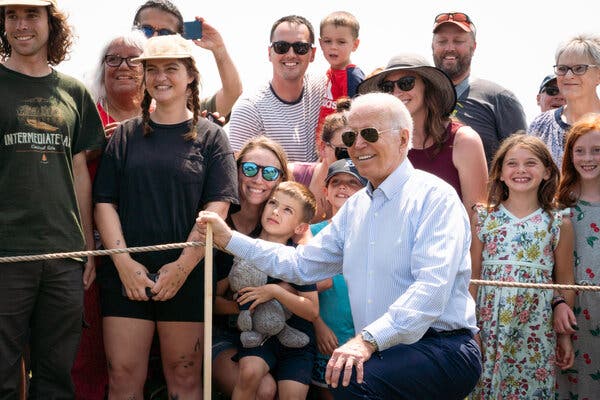 President Biden had hoped to turn the Fourth of July into a celebration not just of the nation’s independence, but of reaching his administration’s ambitious goal to have 70 percent of adults at least partly inoculated against the coronavirus before the holiday.

He didn’t quite make it. As of Friday, only about 67 percent of Americans 18 and older had gotten at least one dose of a vaccine, according to a New York Times tracker. Almost 60 percent of all adults were fully vaccinated, and the highly contagious Delta variant was creating hot spots, particularly in states with low vaccination rates, like Missouri.

The shortfall has not dampened the White House’s outlook. The president has pressed ahead with an optimistic message, signaling that this year’s July Fourth celebration will be about “independence from the virus” and a return to some semblance of normal life.

On Saturday, Mr. Biden visited Traverse City, Mich., as part of what the White House called the “America’s Back Together” celebration. On Sunday, he and his wife, Jill Biden, are throwing an Independence Day bash on the South Lawn of the White House, with an invitation list that includes 1,000 military personnel and essential workers.

A sense of a new day seems to be shared by many Americans, who have returned to prepandemic Fourth of July rituals in droves, flocking to the roads and to the skies in the stiffest test yet for the nation’s travel infrastructure since it was mostly shut down by the pandemic in March 2020.

Despite the new variant’s spread, reports of new cases across the country have been holding steady at 12,000 a day, the lowest since testing became widely available. The U.S. average of fewer than 300 daily deaths from Covid-19 is a decline of 23 percent over the past two weeks. Hospitalizations are also dropping.

Some public health experts cautioned, however, that scenes of celebrations might send the wrong message when wide swaths of the population remain vulnerable.

The continuing threat of the virus was brought into sharp focus on Saturday, when the authorities announced that six emergency medical workers helping with rescue efforts at the site of a collapsed condo in Surfside, Fla., had tested positive.

On Friday, Mr. Biden urged those who have yet to get vaccinated to “think about their family” and get a shot as the Delta variant spreads.

As India intensifies its vaccination effort amid fears of another wave of the coronavirus, officials are investigating allegations that perhaps thousands of people were injected with fake vaccines in the financial capital, Mumbai.

The police have arrested 14 people on suspicion of involvement in a scheme that administered injections of salt water instead of vaccine doses at nearly a dozen private vaccination sites in Mumbai over the past two months. The organizers, including medical professionals, allegedly charged between $10 and $17 per dose, according to the authorities, who said they had confiscated more than $20,000 from the suspects.

“Those arrested are charged under criminal conspiracy, cheating and forgery,” said Vishal Thakur, a police officer in Mumbai.

More than 2,600 people came to the camps to receive shots of the Oxford-AstraZeneca vaccine, manufactured and marketed in India as Covishield. Some said that they became suspicious when their shots did not show up in the Indian government’s online portal tracking vaccinations, and when the hospitals that the organizers had claimed to be affiliated with did not match the names on the vaccination certificates they received.

“There are doubts about whether we were actually given Covishield or was it just glucose or expired/waste vaccines,” Neha Alshi, who said she was a victim of the scam, wrote on Twitter.

Siddharth Chandrashekhar, a lawyer who has filed a public interest lawsuit in Mumbai’s high court, described the scenario as “heartbreaking.” The court said it was “really shocking that incidents of fake vaccination are on the rise.”

Medical scams are nothing new in India, where, during the country’s mammoth outbreak this spring, profiteers targeted vulnerable Covid patients with fake drugs and oxygen. The police in West Bengal state are also investigating whether hundreds of people, including a local lawmaker, received fake vaccines there.

India has administered more than 340 million vaccine doses, but less than 5 percent of the population is fully vaccinated, according to the Our World in Data project at the University of Oxford. The country is reporting nearly 50,000 new cases daily and nearly 1,000 Covid deaths, numbers that are far lower than two months ago, although experts have always believed India’s official tallies to be vastly undercounted.

On Saturday, the pharmaceutical company Bharat Biotech reported that its Covaxin shot — the other vaccine in wide use in India — was 77.8 percent effective in preventing symptomatic illness, according to the results of a late-stage trial. Those results were published online but have not been peer-reviewed.

The report said that the vaccine prevented severe Covid in 93.4 percent of cases and was also effective against the Delta variant, preventing infection in 65.2 percent of cases.

There have been lingering doubts about the vaccine, which was approved by the Indian government in January and administered to millions before it had been publicly proved to be safe or effective.

As New York has reopened after more than a year of coronavirus restrictions, students across the city in the last few weeks have celebrated the end of a school year unlike any other. In-person graduation ceremonies have returned for the first time since 2019, marking what students and teachers hope will be the beginning of a return to normal life.

Members of the graduating class of Bronxdale High School were treated like local celebrities as they stepped onto the lavishly decorated football field for their ceremony last month.

Friends and family behaved like paparazzi, waving and instructing the masked graduates to look their way so they could take the perfect picture. Parents, siblings and other supporters made loud declarations, sometimes with a bullhorn, saying, “That’s my baby!” and “We’re so proud of you!” as the graduates made their way to their seats.

For some it was a bittersweet moment. A few days after her grandmother died of Covid-19 in April, Akayla Green, 18, found out that she had gotten into Cornell University on a full scholarship. Soon after that, she learned she would be this year’s valedictorian.

“I knew that I was doing well in classes, but I just assumed other students were doing better just because they were more on top of their work and turning it in on time, and I was struggling with that at moments,” she said.

Her mother, Kerri Ann Brown Lyons, 44, beamed, and said: “For me to be here today seeing that she got a full ride to Cornell, it’s amazing.”

On May 14, Greece officially opened its doors to vaccinated and coronavirus-negative visitors from much of the world, including the United States.

In doing so, the country jumped ahead of a broader European Union reopening at a time when cases remained high and more than three-quarters of the Greek populace was still unvaccinated. It was a gamble Greece couldn’t afford not to make, after seeing its economy shrink a staggering 8.2 percent in 2020. The country welcomed only 7.4 million visitors last year, compared with 34 million in 2019, when travel and tourism accounted for more than 20 percent of Greece’s economic output.

“It’s beyond wanting. We need the people to come back,” said Chara Lianou, an Athenian with dyed-lilac hair and matching acrylics who was serving coffee at Kafeneion 111 in the neighborhood of Monastiraki, part of Athens’s Old Town. “The economy needs it, and going back to work, you feel like you are doing something. The communication with the people, even the bad ones, they make my day,” she said.