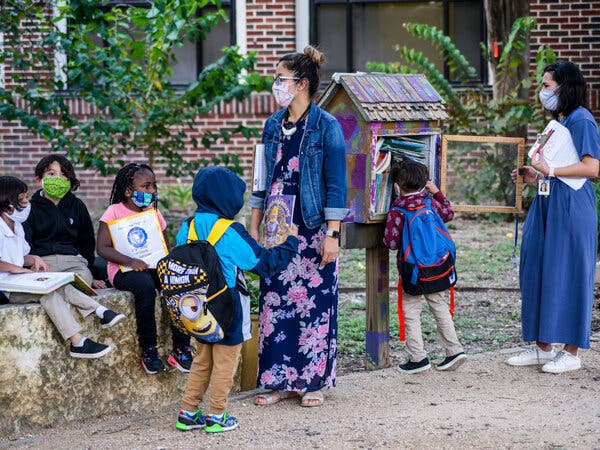 The agency said in new guidance on Thursday that it would immediately stop enforcing the ban on mask mandates until litigations were resolved.

In a reversal, the agency’s new guidance requires schools to notify their local health department if a student tests positive. The school must also notify students in the same classroom as well as those who share extracurricular activities.

As coronavirus hospitalizations have again surged in the state, nearing last year’s peaks, Mr. Abbott has resisted calls for new mandates and doubled down on his ban.

School districts say they need mask mandates to combat a spike in pediatric cases, just as they face the monumental task of trying to restore in-person learning and reverse the devastating setbacks experienced by a range of students. A confluence of factors — including the Delta virus variant’s contagiousness and the fact that people under 12 are not yet eligible to be vaccinated — is sending more children to hospitals, especially in areas of the country where the virus is surging, like Texas.

New daily cases in Texas have increased by 37 percent over the past two weeks, approaching the peak levels of winter, according to a New York Times database, as the virus stretches hospitals in hotspots to their limits. According to the most recent data from the Texas Department of State Health Services, 829 students and 872 school staff members had tested positive for the coronavirus as of Aug. 8, The Associated Press reported.

Last week, after Mr. Abbott’s ban suffered at least three legal setbacks, the state attorney general, Ken Paxton, said that he was taking the issue to the State Supreme Court. The setbacks were in areas with Democratic leaders, rampant cases and rising hospitalizations.

The State Supreme Court sided with the governor on Sunday, ruling temporarily that schools could not make masks mandatory.

Thursday’s ruling denied the governor’s request to block a Travis County judge’s temporary restraining order that allowed mask mandates. The court said the attorney general should have taken his case first to an appellate court.

In another legal fight, parents of young children with disabilities filed a federal lawsuit against Governor Abbott on Tuesday over his ban, arguing that it prevents their medically at-risk children from being able to attend school safely.

On Tuesday, Mr. Abbott’s office announced the governor, 63, had tested positive for the coronavirus and had no symptoms, but had begun receiving monoclonal antibody treatment. The governor received his first vaccine dose in December.

Senators Roger Wicker, Republican of Mississippi, Angus King, independent of Maine, and John Hickenlooper, Democrat of Colorado, said on Thursday that they had tested positive for the coronavirus, adding to the number of breakthrough cases among lawmakers.

“Senator Wicker is fully vaccinated against Covid-19, is in good health and is being treated by his Tupelo-based physician,” his spokesman, Phillip Waller, said in a statement released by his office, adding that the senator was experiencing only mild symptoms.

The announcement from Mr. Wicker came as his home state has shattered previous records for new cases this week, and is now reporting more new cases relative to its population than any other state in the country. Mississippi is averaging 118 new cases a day for every 100,000 people, according to data compiled by The New York Times.

“While I am not feeling great, I’m definitely feeling much better than I would have without the vaccine,” he said. “I am taking this diagnosis very seriously, quarantining myself at home and telling the few people I’ve been in contact with to get tested in order to limit any further spread.”

Mr. Hickenlooper said on Twitter that he was experiencing limited symptoms and expressed gratitude to scientists who had developed the vaccine. He also encouraged vaccinated people to get booster shots in accordance with a plan that the Centers for Disease Control and Prevention announced this week.

The Senate is in recess this week after adjourning early last Wednesday, leaving it unclear whether any of the men had been in recent contact with other lawmakers, as well as when or where they were first exposed. Their diagnoses bring to 11 the number of senators who have tested positive so far, according to news reports compiled by Ballotpedia, a political data website; more than 50 members of the House have tested positive.

Several other vaccinated politicians have recently announced breakthrough cases of their own, including Senator Lindsey Graham of South Carolina, who said he had tested positive for the virus after attending a gathering hosted by Senator Joe Manchin III of West Virginia.

On Tuesday, Gov. Greg Abbott of Texas tested positive and began receiving an antibody treatment, highlighting both the growing concerns over breakthrough cases in the United States and the political tensions over public health measures that Mr. Abbott has consistently opposed in his home state.

While Mr. Wicker has encouraged his constituents to get vaccinated and has applauded the national vaccination effort in official statements, he has also resisted elements of the Biden administration’s coronavirus response. In June, he introduced a resolution calling on the C.D.C. to end a mask mandate for vaccinated people on public transportation.

As the Delta variant spreads aggressively, infections in vaccinated people have been seen more frequently, though they are still rare. The surge and the rising frequency of breakthrough infections have prompted agencies to extend public health measures. The Transportation Security Administration said on Tuesday that the mask mandate would remain in effect on public transportation through Jan. 18.

Because of an editing error, an earlier version of this item referred incorrectly to John Hickenlooper’s elected office. He is a senator, no longer a governor.

Few places benefited from China’s vaccine diplomacy as much as Southeast Asia, a region of more than 650 million that has struggled to secure doses from Western drugmakers. Several of these countries have recorded some of the fastest-growing numbers of cases in the world, underscoring the desperate need for inoculations.

China, eager to build good will, stepped in, promising to provide more than 255 million doses, according to Bridge Consulting, a Beijing-based research company.

Half a year in, however, that campaign has lost some of its luster. Officials in several countries have raised doubts about the efficacy of Chinese vaccines, especially against the more transmissible Delta variant.

Indonesia, which was early to accept Chinese shots, was recently the epicenter of the virus. Now, officials there are administering the Moderna vaccine as a booster to health care workers who had received two doses of Sinovac.

And in Thailand, residents vaccinated with one dose of China’s Sinovac are now given the AstraZeneca shot three to four weeks later.

The setback to China’s vaccine campaign has created a diplomatic opening for the United States when relations between the two countries are increasingly fraught, in part because of the coronavirus.

Vaccine aid from the United States offers an opportunity to restore relations in a region that American officials have mostly ignored for years while China extended its influence. The Biden administration has dispatched a crowd of senior officials, including Vice President Kamala Harris, who is scheduled to arrive on Sunday to visit Singapore and Vietnam. It has also, at last, made its own vaccine pledges to Southeast Asia, emphasizing that the American contribution of roughly 20 million shots comes with “no strings attached,” an implicit reference to China.

Of the 1.5 million nursing home staff members in the United States, some 540,000 are unvaccinated. Their fate could be directly impacted by a policy announced on Wednesday by President Biden requiring all nursing home employees to be vaccinated, with the rules likely to take effect sometime in September. Facilities that fail to meet that target could face fines or lose eligibility to receive federal reimbursement, a vital source of income for many.

The practical effect is that workers will have to be vaccinated or lose their jobs.

Janet Snipes manages Holly Heights Care Center in Denver. She wants to see all nursing home workers vaccinated, but not at the risk of losing employees who won’t comply, in an industry with a high turnover rate and a labor shortage.

Ms. Snipes said several employees had told her that they might leave, including one she described as her best nurse. Getting vaccinated “is the safest thing for our residents and our staff, but we feel strongly he needs to mandate for all health care settings,” Ms. Snipes said of Mr. Biden. “We can’t afford to lose staff to hospitals and assisted living facilities.”

Several major nursing home chains, and some states, have already imposed vaccine mandates. Industry officials said inoculations were strongly advised, but their position on the new policy echoed that of Ms. Snipes.

Of the 625,000 Covid deaths in the United States to date, nearly one-fifth — 133,700 — have been nursing home residents, according to the Centers for Disease Control and Prevention. The industry is again experiencing rising infection rates and deaths among residents, although none approaching the peak figures of last year.