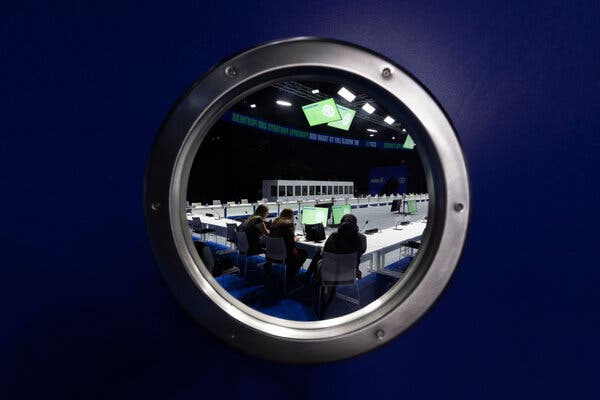 President Biden and other heads of state have wrapped up their big speeches at the international climate summit in Glasgow.

Now the tough negotiations will begin, largely behind closed doors.

The first two days of the climate talks, known as the “World Leaders Summit,” featured a few high-profile announcements by various countries, though scientists say that far more work remains to be done if the world hopes to limit warming to 1.5 degrees Celsius above preindustrial levels.

On Tuesday, more than 100 nations pledged to halt global deforestation by 2030, while a different group of 105 countries vowed to cut emissions of methane, a potent greenhouse gas, by 30 percent this decade. Separately, the Biden administration announced that it would begin regulating methane leaks from roughly 1 million oil and gas rigs in the United States.

Those moves could potentially help slow the pace of global warming (the methane pledge alone could shave 0.2 degrees Celsius off global temperatures by 2050, the United States said) but only if countries actually follow through. And there’s room for skepticism on that front: On deforestation, for instance, a number of countries made similar pledges to protect forests back in 2014 but came nowhere close to meeting their goals.

Now, over the remaining 10 days, negotiators from nearly 200 countries will begin discussing what other steps they can take to make further progress on climate change.

One of the biggest sticking points remains money, which will be a major theme on Wednesday. Poorer countries have long demanded more aid from wealthier ones, whose emissions are principally responsible for temperature rises so far, both to accelerate the shift to cleaner sources of energy and to help them adapt to the dangers of climate change.

Tensions over the issue remain high. A decade ago, the world’s richest nations, including the United States and the European Union countries, pledged $100 billion annually in climate finance to developing countries by 2020. According to the OECD, they are falling short by tens of billions per year.

Last month, rich countries outlined a plan to step up financing and finally make good on their pledge by 2023. And on Tuesday, Japan pledged an additional $10 billion in new financing to help countries in Asia slash their emissions of carbon dioxide and other greenhouse gases. But developing countries have said that’s not nearly enough, and wealthy countries need to take more concrete action to make up the shortfall.

Earlier this week, India called for a $1 trillion commitment from wealthy countries to help developing nations make the transition to renewable energy. Small island nations threatened by rising seas petitioned an international court to force the richest parts of the world to pay them for damages caused by climate change.

In the days ahead, countries are also expected to discuss ways to step up actions on emissions, in order to keep alive the goal of limiting warming to 1.5 degrees Celsius, a threshold beyond which dangers from heat waves, floods, droughts and wildfires grow immensely.

One potential idea on that front is to have countries come back every year after Glasgow with increasingly ambitious climate pledges, rather than every five years as called for under the 2015 Paris climate agreement.

“We know that what countries are doing now isn’t nearly ambitious enough, so what’s the plan to accelerate those efforts?” said Bill Hare, chief executive and senior scientist at Climate Analytics, a nonprofit organization. “One possibility would be for countries to all come back next year and every year after with new, more ambitious commitments, although I suspect that not every country will want to agree to that.”

As world leaders gather, a range of activists and experts are using the COP setting to make their cases to a global audience. A number of prominent climate activists, including Al Gore and Greta Thunberg, will be speaking as part of a series of events at The New York Times’s Climate Hub, an event running alongside COP26.

The event is free to watch online. Ms. Thunberg, the environmental activist, will speak at 4 p.m. U.T.C. (noon Eastern) about the media’s role in covering climate change. Mr. Gore, the former vice president of the United States, will speak at 3 p.m. about the data needed for climate solutions and what can be done to make climate data more accessible and more transparent.

But even as John Kerry, the U.S. climate envoy, said on Twitter that those steps added “crucial momentum” to combating climate change, environmentalists argued that the plans lacked the scope and detail to make them credible.

And Mr. Bolsonaro’s conspicuous absence from the summit raised questions about his commitment to the reversal.

A week before the conference started, Mr. Bolsonaro said in an interview that he would not attend for “strategic” reasons, without clarifying. Days later, Vice President Hamilton Mourão suggested Mr. Bolsonaro wanted to shield himself from exposure to protesters.

Mr. Bolsonaro, who took office in 2019, has overseen a surge in deforestation of the Amazon and widespread neglect of environmental regulations. That’s made him the target of condemnation at home and abroad.

If the president attends the summit, “everyone will throw rocks at him,” Mr. Mourão told reporters. Instead, he said, “there will be a robust team there with the ability to, let’s say, carry out the negotiation strategy.”

Days before the conference, Brazil’s government announced a policy to create green jobs while preserving the country’s vast forests. Then, on Monday, Brazil committed to cutting carbon emissions in half by 2030, achieving carbon neutrality by 2050 and ending illegal deforestation by 2028.

But environmentalists and political opponents in Brazil were also quick to poke holes in the announcements. The green growth plan lacked details to make it credible, they said, and the commitment on emissions is essentially unchanged from the one Brazil made in 2015.

Then there is Brazil’s track record. By law, the country was supposed to have already started slashing its emissions. Instead, Brazil is one of the few nations where emissions rose during the pandemic, an increase that was largely driven by a surge in deforestation.

From August 2020 to July 2021, Brazil’s portion of the Amazon lost 4,200 square miles of tree cover, according to the latest numbers published by the National Institute of Space Research.

The crush of people waiting to enter the United Nations climate change summit snakes down the street. Police call out asking the cold, grumbling delegates not to take photos, yet virtually everyone does.

Successfully passing that checkpoint leads only to a second, equally long security queue.

On Tuesday the United Nations climate change body issued a formal apology to the nearly 30,000 people attending the summit in Glasgow for what it called the “inconveniences” of accessing the conference.

In addition to long lines in Glasgow, technology glitches have made it difficult for those trying to monitor the talks online. “In many ways, the first few days of the COP26 have been a learning process” particularly in complying with Covid-related restrictions, the conference organizers wrote, adding, “we are doing our utmost to continuously learn and adapt.”

This week and next, I’m in Glasgow with my colleagues for the United Nations climate summit known as COP26. Prime Minister Boris Johnson of Britain called it “the moment when we get real about climate change.”

Everyone entering the venue has to take a coronavirus test, masks are required almost everywhere and there are strict limits on the number of people allowed at gatherings.

Getting through security can take more than an hour.

Once inside, we’re greeted by sculptures of polar bears in life jackets and imperiled penguins at the pavilion of Tuvalu, a small island nation.

World leaders and their entourages scurry between meetings, but one thing noticeably missing is the voice of civil society groups. Many activists from developing countries had difficulty obtaining vaccinations and affordable accommodations.

As a result, their presence inside the venue is muted, which makes a difference. Environmental activists are the beating heart of these climate conferences, holding leaders’ feet to the fire and showing diplomats the effects of their decisions.

For now, protests are relegated to the streets of Glasgow. On Monday, Greta Thunberg said that leaders inside COP were “pretending to take our future seriously.”

The largest protests are expected on Saturday.

President Biden and other world leaders will be gone by Wednesday. Right now it’s a real question whether nations will meet the urgency of the climate crisis and set policies that will hold global warming to relatively safe levels.

Read more coverage of the COP26 summit in Glasgow.

For years at global climate talks, developing countries have said that they need more financial help from wealthy nations to speed up their shift away from fossil fuels.

Now the world is about to get a major test of how that might work in practice.

At the Glasgow climate summit on Tuesday, South Africa announced that it had secured commitments for $8.5 billion in financing over the next five years from France, Germany, Britain, the United States and European Union to help install more clean energy, accelerate the country’s transition away from coal power and cushion the blow for workers who may be affected by the shift.

“This is a big deal,” said Jesse Burton, an energy policy researcher and senior associate at the University of Cape Town and E3G, a research group that focuses on climate change. “It’s a major test of whether wealthy nations can help developing countries embark on a just transition away from coal.”

South Africa, the world’s 15th-largest emitter, still relies overwhelmingly on coal, which supplies 87 percent of the nation’s electricity. While the country has pledged to reduce its overall carbon dioxide emissions between now and 2030 as part of global efforts to tackle climate change, it faces enormous obstacles in doing so.

South Africa’s state-owned utility, Eskom, is already drowning in more than $27 billion in debt, in part because of investments in coal plants, and the utility has struggled to supply reliable power, often resorting to rolling blackouts to meet demand.

For South Africa to meet its most ambitious climate goals by 2030, analysts have said, the country will most likely need to speed up the retirement of existing coal plants while building large amounts of renewable energy generation and transmission lines to meet growing demand.

Making the task even tougher, the country’s fragile economy remains dependent on coal jobs, with more than 120,000 people working at power plants and mines. Past discussions over when and how to shift away from coal have been politically contentious.

President Cyril Ramaphosa of South Africa said on Tuesday that the $8.5 billion in loans and grants pledged by wealthy countries could help the country finesse that transition by accelerating investment in renewable energy while ensuring that Eskom can access resources to repurpose old coal stations slated for retirement over the next 15 years.

“It is proof that we can take ambitious climate action while increasing our energy security, creating jobs and harnessing new opportunities for investment, with support from developed economies,” Mr. Ramaphosa said.

Still, plenty of questions remain about how the partnership will work in practice. Details are still forthcoming about how much new clean energy will be built, and how much coal will be phased out. There are also questions, analysts said, about whether donor countries will follow through on their commitments, whether there will be transparency in how the funds are used and whether they will benefit local communities.